This story has been submitted to the People's War site by Chris Hall for Kent Libraries and Archives and Canterbury City Council Museums on behalf of Shelagh Worsell and added to the site with her permission. The author fully understands the site's terms and conditions.

I was just 12 years old when war was declared. It was a depressing time for months prior to the declaration. I felt bewildered and numb and had difficulty understanding why mum and dad were looking so sad. One of my brothers was already in the Merchant Navy and my other brother was signing up in the RAF .My father was politically interested and had the news on all the time. We all had to keep quiet because the sound from our wireless would fade away and then come back again. Within a week or so of the declaration of war the schools arranged evacuation and my parents asked me whether I would like to go (1 think it was to Devon or South Wales). I said I wanted to stay. Dad came up and squeezed my shoulder, I knew he was pleased. Then the Vicar asked if l would join his daughter who was going to a private house in the country somewhere. I wouldn't go.

My school days became one week mornings only and one week afternoons. This way we were able to have as many lessons as could be fitted in due to the shortage of teaching staff ; a lot of them went into the forces. A number of elderly retired teachers were called in to replace them. When the air raid sirens sounded we had to crawl under our single desks. At times we were on the top floor of the building and there was no time to get downstairs. I remember shaking with fear but at the same time giggling. We could see each other under the desks and our navy blue knickers were on display; we couldn't sit under the desks but had to kneel as low as we could. At the end of the school day I felt more secure walking home because mum or dad would usually meet me. Lunchtimes, if the all-clear had sounded, the teachers allowed us home and that was a ten minute run for me. There was fear in the air about you and I ran like the clappers, mum usually meeting me halfway.

My dad decided to have an Anderson shelter. A lot of the neighbours thought he was crazy, they mostly chose the Morrison shelters which went indoors. Dad dug a great big pit in the back garden, larger than what was required for the shelter, but dad had ideas! He concreted the base and up the sides. Once the shelter was in place, about four feet in the ground, he covered it with some tarpaulin and then some earth and to crown it he replaced his wonderful marrow plant he had removed to make way for the hole! His next job was a stirrup pump. This was situated in part of the extra piece he had dug out. It was plumbed in and we had to do 500 pumps in the morning and 500 pumps in the afternoon to keep the shelter dry inside. This task was, on occasions, used as a punishment when I did anything wrong. We had an old carpet laid down inside the shelter, dad built four narrow bunks, the top bunks letting down to enable us to sit on the lower ones. It was a tight squeeze in there and I think that is where my claustrophobia started.

We had light and a radio! Also our two cats had a home. The remainder of the extra piece dad had dug was made into two bunks for the cats! And they knew it was for them. At times the puss on top would lean over and put his paw down to see if the other one was there. Our dog had to be chained up outside the back door but he was under an extremely strong workman's bench with blanket and basket, water and a few bones. When I had homework to do I would go into the shelter to do it and then have tea, either in the house or in the shelter, depending on whether the sirens had sounded. At night, anytime after eight o'clock, I soon got into the habit of going to sleep directly the sirens sounded. We all slept in the shelter every night regardless of whether a siren went. To keep warm we had hot water bottles. Looking back I realise it was not easy for mum and dad, they were only in their mid forties and had no privacy together. To this day when I have worries -I sleep.

Dad was out most night’s fire spotting or doing whatever was needed. Mum had to arrange meals to fit in with what was happening. I recall one night dad didn't come home at all. The incendiaries had been falling all night and there were thousands and thousands dropped in our area. Then came the bombs. It was such a bad night. PENGE was the most bombed area for its size during the war. It was early morning when dad arrived home. You can imagine how anxious mum and I were. He told us there was no point in trying to get to school -the main road had been bombed and there was no way across to the other side.

He had arrived home filthy, tired and oh! So sad. I remember crying for him. He had seen so much destruction and had lost a number of friends and their families. He often went in a cafe in Clock House, Beckenham, but early this morning the cafe had been full of workmen having breakfast when a bomb wiped them all out.

Surprise, surprise in 1941, I won a scholarship to a school in Bromley. I was so excited; but dad and mum were constantly worried about the journey, however, they accepted the place I had won. Occasionally the number 227 bus to Bromley had to delay its journey due to either unexploded bombs or the sirens sounding. One of the most fearful things which gave me nightmares for many years were the floating landmines. I was more frightened of them than anything else.

The girls and I had a short walk from the bus stop along Wharton Road in Bromley to the school. Just as we were going through the school gate to cross the playground a German plane flew in low and then made another sweep just as we crossed the playground and deliberately strafed the school with bursts of fire. I don't think anyone was hurt but the Germans knew exactly what they were firing on, their height made the school and us so visible to them.

When things got pretty hairy with raids, my dad opened up the fence between our immediate neighbours and ourselves so that they could join us in our shelter if they wished. They had opted for a Morrison. Another person who joined us in our shelter was a cousin. I recall the strange situation of four females sitting 'in the garden' past midnight, looking at jewellery and laughing our heads off at photographs. Dad and the Mr neighbour were busy elsewhere. Whilst we were in the shelter the heavy thump of bombers were continuously passing overhead on their way to the London Docks. Somehow or other we knew where they were heading. Midway through the war the days seemed to be long and sunny. We watched the dog fights against bright blue cloudless skies and would give great cheers when we saw a German plane smoking and descending fast to earth and then shouts would go up as we saw a parachute. I am writing this as though we took it all in our stride. I suppose in a way we did. The early fear seemed to have subsided and it proves the point that familiarity breeds contempt.

In 1943, I had left school and was working in an engineering office, when the girl I was working with was told to go home. She only lived a street away from me and I went with her. Her mum had been at their front gate saying goodbye to the son who was returning from leave to his RAF station. He was up the road when a V2 exploded. Mum was killed but the boy was o.k. I suppose we became rather blasé about the war; being in the wrong place at the wrong time was something we could not do anything about.

It had been quiet for a few weeks and mum allowed me to go to the cinema at the end of the road for a matinee showing "Love Story". As I was walking home, still in daylight, I heard sweet melodic whistling coming from behind. The tune was "Cornish Rhapsody" from the film. Quite unconcerned and enjoying the music, I was suddenly pushed in the back and fell to the ground in the gutter with a body on top of me! It was only a few seconds but seemed to be ages and ages before I could move. Then I was gently lifted to my feet and a voice was apologising. It was a young man, a neighbour of ours. He had heard the engine cut out of a Doodlebug (which in my dreamy state) I had not heard. He apologised if he had hurt me but all I felt was tenderness towards him for we both knew the dreadful weapon had landed just a street away. I'll never forget him. I never ever regretted not being evacuated. I was, in a way, proud to have gone through the war with mum and dad (my sister had joined the WRNS early 1941 ). I know mentally for a while I was scarred; today I can not look up into the night sky at the moon, stars or any phenomena which may be there. My nightmares have often brought those dreadful years back, but I know that I grew up to be a stronger person. I have not been able to cry easily. I stopped myself crying, particularly when my brothers and sister had to return from leave to their bases. I didn't cry because I didn't want to upset mum and dad anymore than they were already. 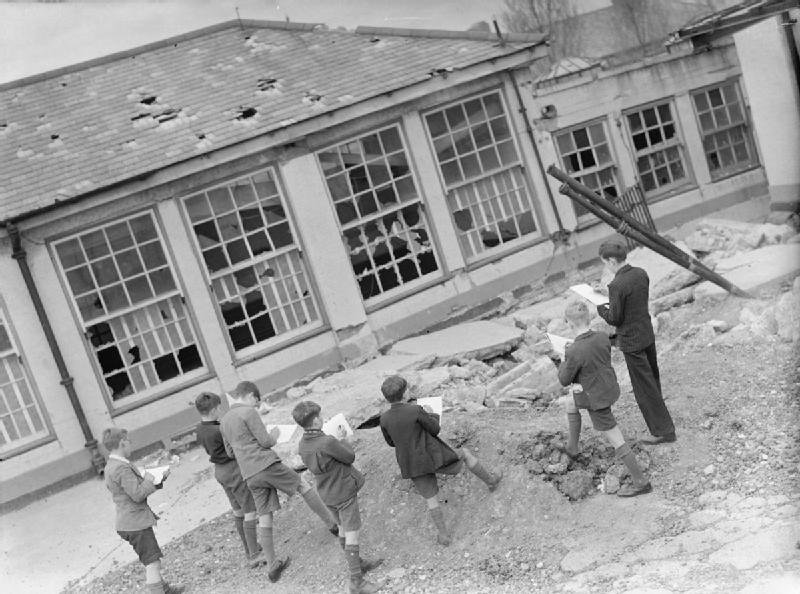 Children at Moorside Road School draw the damage suffered by their school as part of an art lesson. Many panes of glass are missing or broken, and there are a large number of tiles missing from the roof of the building. -

Children at Moorside Road School draw the damage suffered by their school as part of an art lesson. Many panes of glass are missing or broken, and there are a large number of tiles missing from the roof of the building. -