A September Night in the East End

It is September 1940 and I am returning from Chrisp Street Market with my mother. I'm nearly seven and I've come back to London after being evacuated to Glastonbury during the 'phoney war'. It's a lovely warm evening and my mum is anxious to get back home with her shopping.

As we begin to turn into Brunswick Road, we hear the sound of gunfire - not unusual, as we live near the East India Docks and there is frequent gunnery practice. But then we hear the planes and the air raid sirens. ARP wardens are running about blowing whistles, shouting, 'Take cover, take cover!' We start running the last few yards home.

My dad is panicking and my nana (who speaks little English) is hysterical. We then all bolt into the Anderson shelter in the back yard, just as the first bombs start exploding. My Dad hates the Anderson as it's always full of spiders and he's scared of them. The noise is horrendous. Every time a bomb falls near, everything shakes. Above us there is the 'voom, voom, voom' sound of the planes. The ack-ack guns make a hollow booming noise and the Bofors make a rapid staccato rattle. It seems to go on for hours and then, suddenly, there is a pause, then the 'all clear'.

Stunned by the noise, we emerge. The house is still standing and doesn't seem damaged. We go out through the front door to see a scene which even now I recall as vividly as when it happened. The entire street is choked with emergency vehicles - ambulances, fire engines - all clanging their bells. The gutters and pavements are full of writhing hoses like giant snakes, and above... the sky. The sky - to the south, still a deep, beautiful blue, but to the north a vision of hell. It is red, it is orange, it is luminous yellow. It writhes in billows, it is threaded through with wisps and clouds of grey smoke and white steam. All around there are shouts and occasional screams, whistles blow and bells clang.

The neighbours stand around in small groups. They talk quietly and seem as dazed as us. Apparently most of the flames are from the Lloyd Loom factory down the road, which has taken a direct hit. The gutters run with water, soot and oily rainbows and the reflections of the fiery sky. Our respite does not last long. About 20 minutes later, another alert, we are back in the Anderson, and it all begins again.

The noise makes my knees hurt. When I tell my mother, she laughs and says it's growing pains. Maybe, maybe, but for the rest of the war; whenever there was a raid my knees always ached!

This story was submitted to the People's War site by Jim Humphreys. He fully understands the site's terms and conditions.

4 SHELTERS
5 V.WEAPONS
THESE ARE TO BE FOUND IN SEPARATE ENTRY UNDER 'JIM HUMPHREYS - PART 2 OF 2'

I cant remember much about the start of the war except my father used to disappear on certain evenings. It was when we returned from our evacuation from South Wales that our street looked somewhat different. Passed the Infant School and not far from where we lived, there were some 4 houses that had fallen down. Then on our way to where my mother's mother lived there were some more and even across the road there were more houses that had fallen. I was told that air-planes had dropped bombs and this was why the houses were like they were. I was also told that we were not to go in them as they were dangerous and not to be played in.
At the bottom of our street there was an old wooden railway bridge and when the trains went across it, the noise was such that it used to keep us awake. Later we found out that the noise was to do with an anti-aircraft gun on the rails and it used to go to the areas that were being bombed.
After school there was not a lot to do, apart from collecting shrapnel (bits of metal from either bombs or anti-aircraft shells). Some cannon shells were also a collectable item. Later on there were the Butterfly Bombs (anti-personnel devices). These had a pair of little propeller blades and they used to float down so they did not explode on impact. (You touched them and they did!).
There was no television and no cinemas that we could go to at that time of the evening, so we had to invent things. There were about six or seven of us lads about the same age. One of them found an old motorcycle tyre and we organised races up and down the street. While one lad rolled his tyre up and down the others counted. We all took turns, the fastest being declared the winner.
Other tyres were found and in a short time we all had one. We used to use plaster from the ruins to mark out hopscotch grids, positions of goals and penalty areas for football. Coats or pullovers were used to mark the width of the goal down the middle of the road and very rarely did we have to remove them. A ball game we used to play was called Cannon. Two teams were formed and four pieces of firewood were placed against a wall in the form of a cricket wicket. One team would try to dislodge this wicket with a tennis ball (team A), if successful they would scatter away from the area and try to resurrect the wicket. However team B would try to stop this happening by trying to hit the members of team A with the tennis ball. Once hit by the ball you were out of the game until the game was restarted. Another game was rounders.
During the war years we used to have what was known as double summer time. At 10PM in the evening it was still very light and at times we were so engrossed in games that time was forgotten. These games would be interrupted by parents or others to remind us that it was late. It would be about this time of day we would watch the bombers flying quite high going to their targets. At times we would wonder if the children where the bombs were going to be dropped were being treated as we were.Were they getting tear gas dropped on them; and were they in the playground being shot at?
We were not allowed into the playground while there was an air raid on. When the all clear went, a teacher used to go out to see if it was safe. The following day about lunchtime the aircraft would return, some of them quite high but others very low. We used to stop what we were doing and marvel on how they were still flying in the condition that they were in. Some had engines stopped while others had tail parts missing and others had such large holes that you could see right through them. We also saw the vapour trails when the dogfights between Allied and the German fighter planes occurred.
On V.E. and V.J. days everybody local erected huge bonfires where the bombed houses had been to celebrate the end of the war.

This is an extract from an interview with Stan Hook, taped on 14 July 2003 and added to the site with his permission by Rob Illingworth of the Folkestone Heritage Team.

Stan Hook was a motorcycle messenger boy in the Auxiliary Fire Service. His account of the London Blitz, especially the bombing of Docklands and the City of London, has been published in We Remember the Blitz, compiled by Frank and Joan Shaw.

'I've not mentioned this anywhere but I was in the bath. It was about five o'clock on a Saturday afternoon, September the 3rd I think it was, 1940. I lived in the slums of London and we had a tin bath. I was out there scrubbing my back and bathing myself as best I could and all of a sudden the sirens went.

'I thought, that's early tonight. Usually it's about six o'clock, seven o'clock when the sirens go, but this particular evening they went and I thought, that's unusual. All of a sudden I heard this whistling noise and Crump! My hair absolutely shot 'cos this bomb fell about 50 yards away from the house and I thought, My Christ, that's a bomb!

Editor's note: The date normally association with the start of the Blitz in London is 7 September 1940. War was declared the previous year on 3 September. 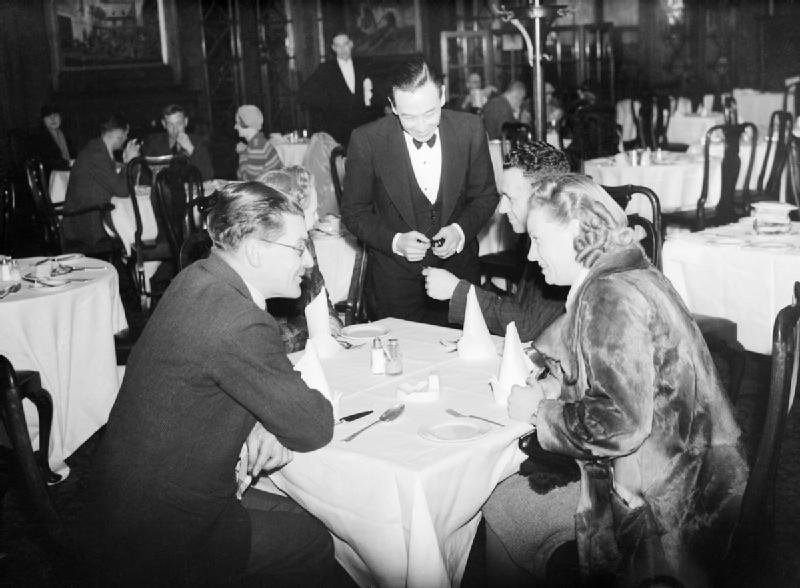 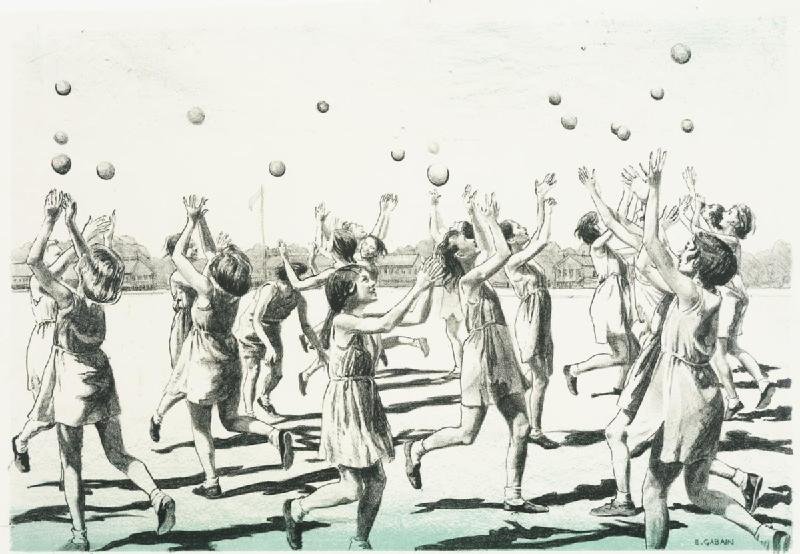 image: A large class of girls, dressed in gymslips and plimsolls, playing out in a field in front of a camp. The wooden camp buildings stand in the background. Each girl has a ball, which she tosses in the air and catches. - 'This one of the thirty-one camps which ... 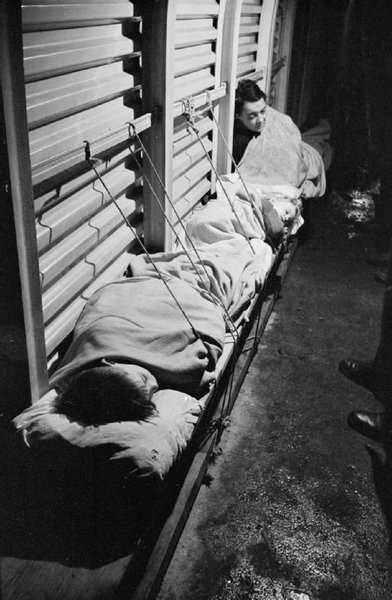 Two children sleep on a bench in a trench shelter. As the shelter had been flooded by heavy rain, their mother (also pictured) has tied ropes from the bench to the wall, to prevent them from falling off the bench onto the wet floor below. -

image: A large class of girls, dressed in gymslips and plimsolls, playing out in a field in front of a camp. The wooden camp buildings stand in the background. Each girl has a ball, which she tosses in the air and catches. - 'This one of the thirty-one camps which ...

Two children sleep on a bench in a trench shelter. As the shelter had been flooded by heavy rain, their mother (also pictured) has tied ropes from the bench to the wall, to prevent them from falling off the bench onto the wet floor below. -