Bombs dropped in the ward of: Bush Hill Park

Fear and Fun for Children during the War

I'm 70 now, but there are things about the war I shall never forget. It's strange how the war could be so scary at times and yet there were times when it was so funny, or even exciting.

Our air raid shelter was down the bottom of the garden. It was really hard work digging the clay out to erect it. Our neighbours put theirs facing the wrong way and so they had to add a big pile of earth in front of it in case their house was hit and the debris fell right up against the entrance.

By the time we got ours dug out and the corrugated sheets in position it seemed a complete waste of time. When were the German bombers ever going to come? My dad decided to use it as a sort of shed and he put the straw for the chickens we kept inside it. The problems this caused were that it all became soggy and started to smell, and even when we got rid of the straw you could still smell it. London clay wasn't exactly ideal for a shelter as it got ever so wet during the winter and, of course, that seemed to be the time when we started to use it as an air raid shelter.

The bombers arrived in due course. My brother and I had to go to bed at our usual time and it was horrible down the garden with the smell and listening to the guns firing and the bombs dropping. One night I got so scared that I couldn't stand it any longer. I got out and started walking up the back garden in my jim jams. As I looked around it was pitch black, but there were hundreds of search lights illuminating the clouds, and if a German plane happened to be picked up he didn't seem to have much chance of escaping. I almost felt sorry for these Germans.

Defending the garden with a spade

But for me, the most scary part of the raids was this: what would I do if an enemy pilot got shot down and parachuted into our garden? I spent ages working out where the garden fork was and wondering if I'd be able to hit him with the spade. And to make matters worse, the kids in our street started saying that the house next door, which was now empty because the neighbours had left for the country, was an ideal place for German spies. We were right next to the railway from Liverpool Street to Enfield Town. Across the line was the Edmonton County School playing field which would be ideal for parachutists. They even erected 12-foot poles to stop planes and gliders from landing.

One spring morning I was still in bed when my dad called upstairs before he went to work on his bike. He shouted out that a German aeroplane had been brought down by our guns. It had crashed nearby and its propeller had ended up in our garden. Crikey! That would be worth a load of shrapnel in a swap. I shot downstairs to see it and my Dad smiled and said: 'April Fool!' It took me weeks to get over that, but now it really makes me laugh.

Dog fights in the sky

On the other hand there would be the excitement when you could sit on top of the shelter and watch a dog fight in the clear, blue skies. The planes seemed to go whizzing round in tight circles and you'd see the puffs of white smoke when they fired at each other. Sometimes other kids' dads came home on leave and brought models of aeroplanes they'd made when they were off duty. I was very envious of them but my dad, who wasn't fit for service, worked in a furniture factory, making soles for clogs and sometimes gliders. He made all the kids wooden tommy guns which had good sound effects, a bit like rattles that football supporters used to have. I was very popular then, even if I did keep the best one for myself.

Mind you, the war could be funny at times. One day old Mother Gutteridge up the road came out and told us off for throwing snowballs and smashing her front window. It actually turned out that my friend, Ronnie Gutteridge, became the proud owner of a shell cap which had gone clean through their window and buried itself in the floor boards behind their settee. Mrs Gutteridge didn't show her face for ages after that.

I suppose the real problem in these matters is that what goes up always comes down. Most of the shrapnel we collected started off as shells being fired up into the night skies by our own anti-aircraft guns and then coming rattling down on the tiles of our houses.

One of the scariest moments I had in the war was to do with things going up and then coming down. One evening towards the end of the war my dad told me to go on my bike up to Tramway Avenue for some fish and chips. I had to cross the railway and then ride along Galliard Road.

As I was riding along with the shopping bag dangling over my handle bars I heard a noise like an old motor bike. And then I saw it. It was coming along Galliard Road straight at me. It was a doodlebug. And then the worst possible thing happened. The engine conked out.

I turned my bike round and pedalled like mad, watching it over my shoulder. But then the wind started blowing and it tipped sideways, turned and drifted out of my sight over the rooftops. In less than half a minute there was a massive thud and a column of smoke rose over the tops of the houses. To be perfectly honest I had the fright of my life but I couldn't help feeling guilty because I knew that some other poor blighter had copped it while I was still riding my two wheeler. 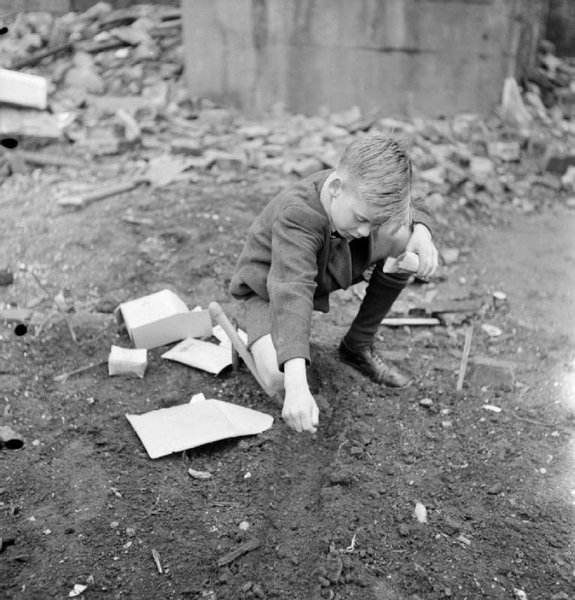 Jimmy West (aged 11) plants bean seeds on a makeshift allotment, on land cultivated from a London bomb site. The seeds he is sowing were donated by America. According to the original caption, Jimmy 'was evacuated for a time to Ware in Hertfordshire. He returned to "put London right"'. -

Jimmy West (aged 11) plants bean seeds on a makeshift allotment, on land cultivated from a London bomb site. The seeds he is sowing were donated by America. According to the original caption, Jimmy 'was evacuated for a time to Ware in Hertfordshire. He returned to "put London right"'. -